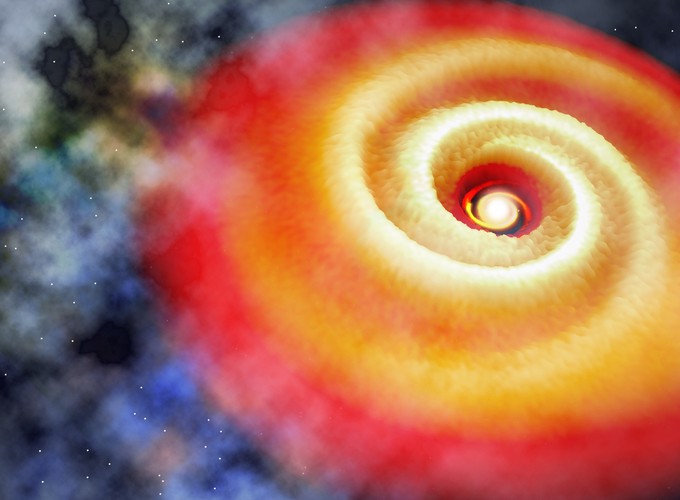 My research involves investigating the physics and chemistry at work within circumstellar discs. Stars like our Sun are created when clouds of gas and dust collapse under their own gravity. As the cloud collapses, the rotation rate of the cloud increases to conserve angular momentum. This causes the cloud to flatten out, creating a circumstellar disc around the central young star.

Planets can then go on to form within these discs (so they are also referred to as protoplanetary discs). There are several theories as to exactly how planets might form, but a set of these theories involves the gas in the disc collapsing, much like the cloud that formed the star did. This ‘top down’ planet formation scenario is most likely when circumstellar discs are very young and contain much mass. In such cases, the disc can become gravitationally unstable, causing rotating spiral waves to appear.

Using computer models, I discovered that these spiral waves can heat the disc sufficiently to alter the chemistry occuring there. Therefore, observations of molecules that trace this spiral structure, using instruments such as the Atacama Large Millimetre Array (ALMA) will show if this process occurs in the youngest circumstellar discs, and enable us to learn much about the process of planet formation.

After this initial study, we performed a similar analysis on a disc that may form planets around a star similar to our Sun. Following the chemistry over a much longer timescale, we found that even these lower mass discs can have their chemistry altered by the relatively weak shocks that are caused by the instabilities in the disc. In fact, permenant changes to the chemical composition of the disc can occur when these dynamic effects are considered. Therefore, these effects may need to be taken into account when considering the chemical evolution of more evolved discs.

Seeing these types of discs ‘in the wild’ was an exciting prospect, but relied on theoretical predictions and simulated observations. However, that changed in 2016 when Perez et al. published wonderful observations of the young system Elias 2-27, showing two prominent spiral arms in the disc. This immediately excited us, as spiral structure is a hallmark signature of gravitational instability. However, it can also be caused by other phenomena, such as a planet within the disc. So, we set about trying to characterise and quantify what types of discs could reproduce the morphology seen in the observations. This involved a series of hydrodynamic and radiative transfer models, along with simulated interferometric observations - not an easy task. After analysing over 70 of these simulations, we found that BOTH a gravitationally unstable disc and a disc with a giant planet were able to reproduce the observations. While this was initially a little disappointing, we then realised that the mass of the planet required to excite the spirals was huge - much larger than anything that could be made via the tradiational method of planet formation by core accretion. So, it looks like Elias 2-27 could either be one of the first observations of a self gravitating disc, or a disc that has very recently undergone fragmentation. Future observations, particuarly near infrared imaging, will be able to disentangle precisely what is happening in the system once and for all. 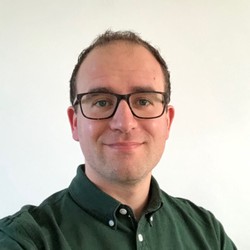